Preheat oven to 350 F, and grease or oil an 8×8 pan. I also recommend putting parchment paper in the pan to make it easier to get the bars out to cool.

And, and 1/8 tsp of sea salt. Mix together thoroughly. Set aside.

Add flour mixture to the egg mixture and stir until combined.

Pour and spread batter into greased 8×8 and set aside.

Bake at 350F for 28 – 30 minutes or until the top is browned and a toothpick comes out of the center clean.

Cool completely then cut into 9 medium size bars and serve. 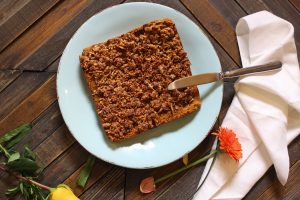